What do I need to know about financial institution licenses for Payment Service Providers?

For a payment company, PI or EMI authorization today means months of expectations. We talked to the customers of eComCharge (white Label Payment Gateway tenants) who have already received European licenses, and who also await obtaining one in other jurisdictions, and here is a review for those who just thought about it. Naturally, it is not a very detailed one, as authorization requires a lawyer. 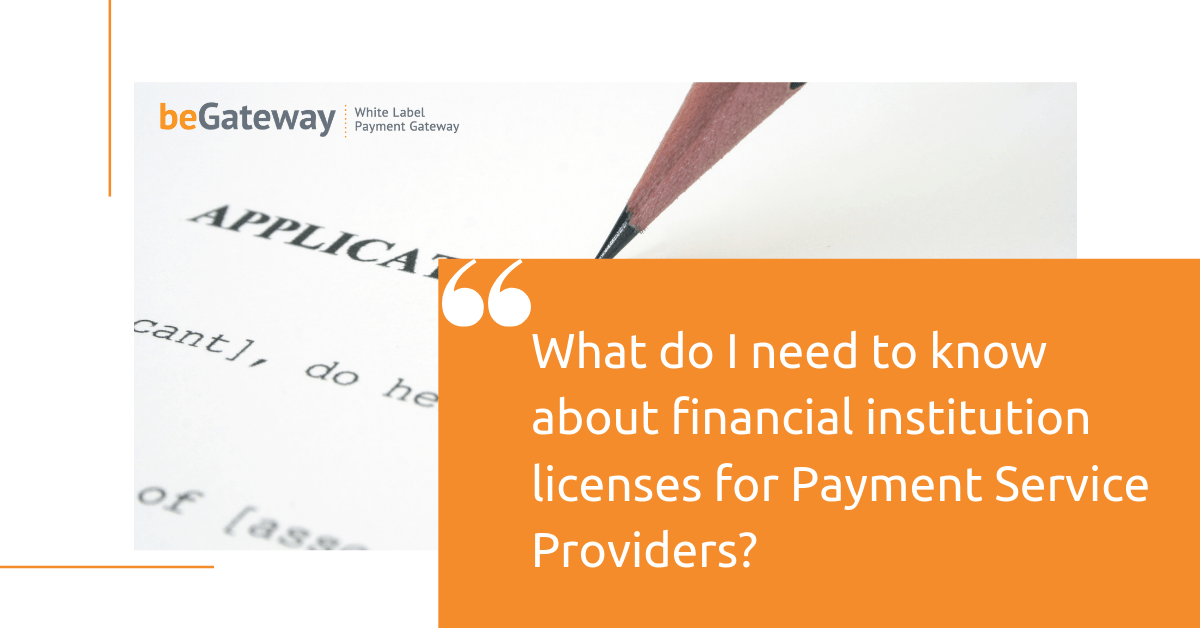 The most popular types of payment licenses in Europe

To date, European payment companies covet one of the two authorization types relating to the Financial Institution and issued under the PSD2 regulation: PI (Payment Institution) and EMI (Electronic Money Institution).

Each jurisdiction in Europe can issue the licenses, but each jurisdiction has its own rules. Therefore, before you apply for authorization in a particular jurisdiction, compare the terms. General conditions are more or less the same:

1. PI (Payment Institution) or API (Authorized Payment Institution) authorization enables companies to provide financial and intermediary services not only in the Internet business. For example: open and close accounts; provide services to replenish accounts in other payment systems; withdraw funds from the accounts of individuals and legal entities; conduct various payment transactions between client accounts; make money transfers; create their own and attract third-party payment instruments, etc. The company that intends to obtain such a license must be registered in the same jurisdiction that issues the PI license.

The PI authorization registered capital for a company going to receive and process payments is €125,000. This amount is to be deposited to a bank account opened in the same jurisdiction. However, the final capitalization amount can be increased by the supervisory authority after studying the company’s business plan, if the initial registered capital does not seem enough for the intended activity.

2. EMI (Electronic Money Institution), aka e-Wallet authorization gives the right to issue e-money and quasi-money (quasi money is non-cash money on time and savings deposits at commercial banks and highly marketable financial instruments traded on the market). The issued money can be used outside the payment system, as well as converted into any other currency. Like PayPal.

With EMI license, the company is almost a bank, but without the right to issue loans. The company can open sub-accounts for its customers within its own bank account, thus creating an electronic wallet.

Typically, such authorization is obtained by companies that plan to create user electronic wallets on the web site for the user to be able to withdraw funds, or for the wallet currency to be used for mutual settlements on third-party sites.

It should be noted that EMI includes all the features of PI license.

In the European Union, the authorized capital of the EMI company is fixed at €350,000. For the entire duration of the authorization, these funds must remain in the company’s bank account opened in the same jurisdiction that issues EMI.

Popular jurisdictions and authorities to apply for authorization

The most popular jurisdiction for obtaining EMI license in Europe is the United Kingdom. The Financial Conduct Authority is the regulator of the financial market in the UK. As a rule, in other European jurisdictions, the Central Bank or a special Commission performs the function of a financial regulator.

Number of PI and EMI licenses obtained in accordance with PSD2 regulation in Europe. The cut-off for data collection was 10 November 2018. The data below has been gathered from the regulators across the European countries (source https://www.bankingtech.com/2018/12/psd2-stats-emi-and-pi-licences-in-europe/): 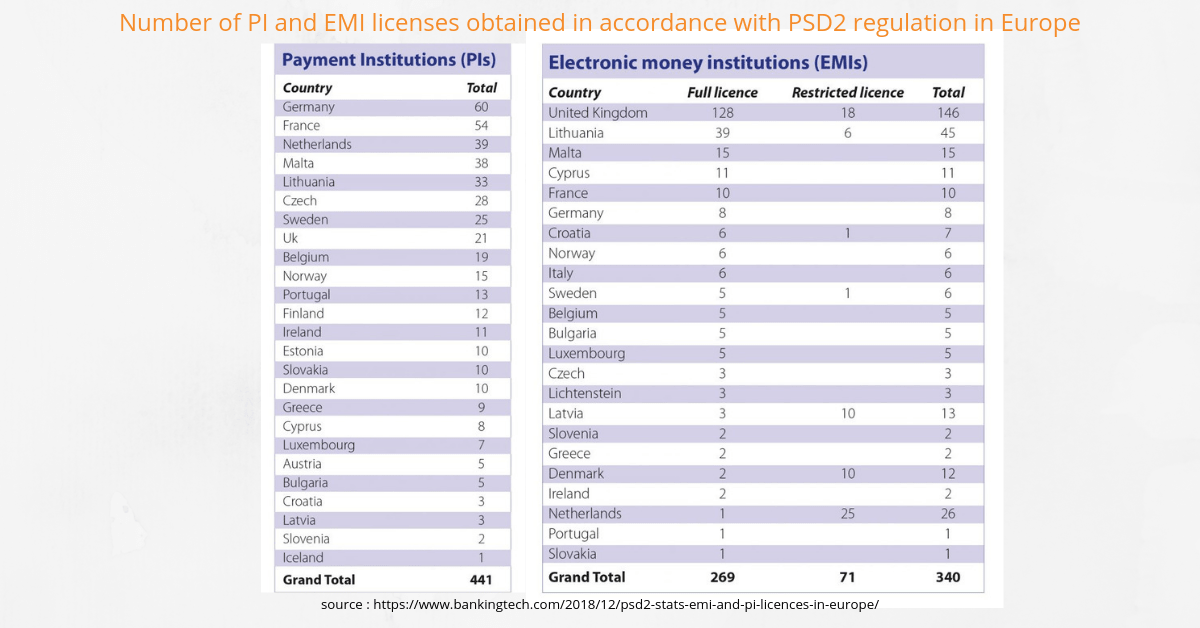 Although PI and EMI licenses are generally accepted in Europe, each jurisdiction establishes its own rules to obtain them, in addition to the generally accepted and required PSD2 (availability of software, risk control procedures, AML, customer identification procedures, technological base, segregated client fund account, operational risks, etc.).

For example, companies in Latvia no longer have the desire to obtain the license due to the restriction: it is now valid only in Latvia and only for the country residents.

By the way, the authorisation process in Cyprus has become more difficult, and the license itself has become less attractive. First, the regulator imposes strict requirements on the geographical area of the company and its customers and actually prefers residents of Cyprus, although the Cyprus license is pan-European (passporting to all countries is offered). Secondly, the Cyprus license does not allow connection to SEPA (Single Euro Payment Area, i.e. interbank payments in the Eurozone), while other countries, such as Lithuania, provide it.

If we talk about non-European jurisdictions and similar licenses, it is worth noting that this market is not regulated as strictly as it is in Europe, while the licenses themselves have different names.

For example, the Stored Value Facilities license in Singapore is an analogue of EMI in Europe. However, unlike the European requirements, the requirements for the applicant are not so strict in the legislation of Singapore. The authorized bodies are guided by international standards when making a decision.

The payment license in Singapore is issued only to companies registered in the country. Both the Director and the shareholders must be residents. Non-residents will need to obtain a residence permit to register a company.

Authorization is quick and easy. However, with the Singapore license, the company can not provide services to the residents of the country. But this license allows the company to work in other jurisdictions, for example, in the Asian region. It is almost impossible for a Singapore company to open an account in a European Bank (banks consider the license not sufficient for such services), but it is possible to do it in Asia, or in the Middle East – in Armenia, in Georgia, etc.

The cost of legal services to prepare documents for authorization varies depending on the jurisdiction in which the payment company is going to obtain a license. While in Lithuania lawyers will prepare you documents for 20 to 25 thousand euros, in the UK the cost of services varies from 50 to 60 thousand euros. And it means working together with the lawyers. For example, a law firm will not write a business plan or company description for you. As for the terms, the authorization process averages 6 to 12 months.

eComCharge Team
We have been developing White Label Payment Platform and maintenance services for Payment Service Providers and Acquiring banks for more than 16 years.
Blog

This website uses cookies to improve your experience while you navigate through the website. Out of these, the cookies that are categorized as necessary are stored on your browser as they are essential for the working of basic functionalities of the website. We also use third-party cookies that help us analyze and understand how you use this website. These cookies will be stored in your browser only with your consent. You also have the option to opt-out of these cookies. But opting out of some of these cookies may affect your browsing experience.
Necessary Always Enabled
Necessary cookies are absolutely essential for the website to function properly. This category only includes cookies that ensures basic functionalities and security features of the website. These cookies do not store any personal information.
Non-necessary
Any cookies that may not be particularly necessary for the website to function and is used specifically to collect user personal data via analytics, ads, other embedded contents are termed as non-necessary cookies. It is mandatory to procure user consent prior to running these cookies on your website.
SAVE & ACCEPT
Requestdemo